Add Bugsnag to your Unity games and applications for iOS, Android, macOS, Windows and WebGL.

After completing this guide, exceptions and crashes from supported platforms are automatically detected and sent to Bugsnag.

This documentation is for version 6 of the Bugsnag Unity notifier. If you are using older versions, we recommend upgrading to the latest release using our Upgrade guide. Documentation for the previous release can be found on our legacy pages.

If you are using Unity 2019 or higher, the simplest way to install Bugsnag is through the Unity Package Manager.

Go to Window → Package Manager and add the package from the following git URL:

This will fetch the latest release available when the URL is added. To get a newer version in future builds, re-add the package. You can also specify an exact version using the git tag for the release after the URL:

See our releases page for the latest version.

The main release of the Bugsnag Unity SDK is also installable via OpenUPM:

You can find the installation instructions and package information here.

You can also download the package from our Github releases page.

Download the latest Bugsnag.unitypackage file and double-click it to import into your Unity project.

If you are using the External Dependency Manager for Unity (EDM4U) to manage Android dependencies, the above installation steps can lead to conflicts between your app dependencies and the external libraries used by Bugsnag Unity.

To avoid this, either use the alternative UPM package at https://github.com/bugsnag/bugsnag-unity-upm-edm4u.git or, if you are installing the Bugsnag Unity package manually, enable support in the Editor via Window → Bugsnag → Enable EDM4U Support or via the script:

Bugsnag will start automatically in your app once you have configured your API key through Window → Bugsnag → Configuration: 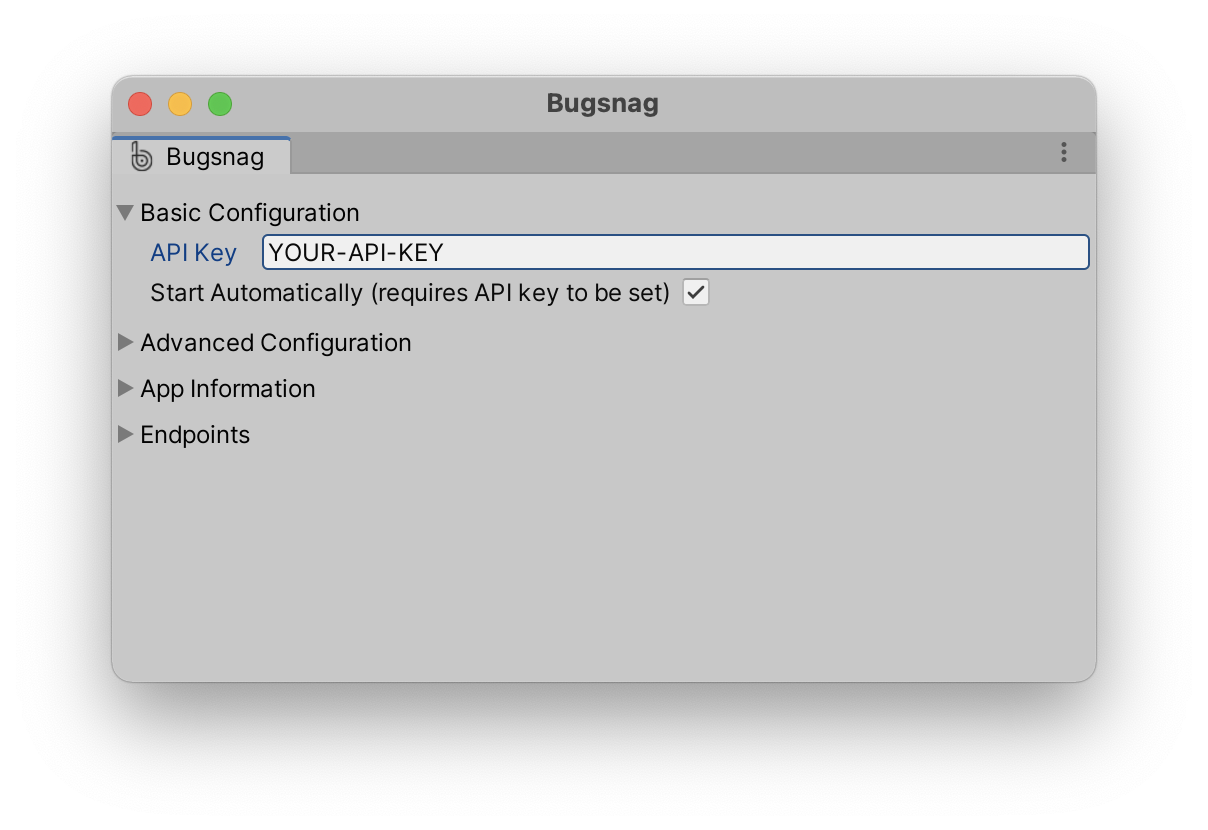 You can find your API key in Project Settings from your Bugsnag dashboard.

If you’d like control over when Bugsnag starts, uncheck “Start Automatically” in the Bugsnag Configuration window. You can then initialize and configure Bugsnag in code:

When started in this way, any values set in the Bugsnag Configuration window will be applied and may be overridden or augmented in code.

Bugsnag.Start() must be called from the main thread – e.g. from the Start() lifecycle function of a MonoBehaviour.

No errors will be captured until Bugsnag has been started. It should therefore be initialized as early as possible during your app’s startup to avoid missing any crashes.

If you’d like to configure Bugsnag further, check out the Configuration options reference.

For Android or iOS projects in Unity follow the showing full stacktraces guide to set up ProGuard mapping, NDK symbols, and debug symbol maps (dSYMs) so you can see the original method names, file paths, and line numbers in stack traces.

After completing installation and basic configuration, unhandled exceptions will be reported and automatically appear on your Bugsnag dashboard.

Unhandled errors that occur outside of your app’s C# code are sent to your Bugsnag dashboard when the app next launches. On iOS, they will not be reported when the debugger is attached.

On iOS platforms, Bugsnag automatically detects terminations of your app caused by the operating system due to high memory usage.

OOM detection is enabled by default as part of the basic configuration steps. If you wish to disable it, see the EnabledErrorTypes configuration option.

OOMs are sent to your Bugsnag dashboard when the app next launches. OOMs will not be reported when the debugger is attached.

When your app fails to respond to interactions in real time it causes user frustration and can lead them to abandon your app altogether.

When the main thread of an Android app is blocked for too long, it appears unresponsive and the Android OS creates an Application Not Responding (ANR) error, presenting the user with a dialog option to force quit the app.

ANR detection is enabled by default as part of the basic configuration steps. If you wish to disable it, see the EnabledErrorTypes configuration option.

ANRs are sent to your Bugsnag dashboard when the app next launches. ANRs will not be reported when the debugger is attached.

When the main thread of an app is unresponsive for a period of time it will appear to have frozen and may be terminated by the system watchdog as described in Apple’s documentation.

Detection of these “fatal” app hangs is enabled by default as part of the basic configuration steps. If you wish to disable it, see the EnabledErrorTypes configuration option. You can also report non-fatal app hangs (i.e. hangs that did not result in the app being killed) by configuring a minimum app threshold hang duration.

Fatal app hangs are sent to your Bugsnag dashboard when the app next launches.

On iOS platforms, Bugsnag detects terminations of your app by the operating system due to the device overheating.

Thermal kill detection is enabled by default as part of the basic configuration steps. If you wish to disable it, see the EnabledErrorTypes configuration option.

Thermal kill events are sent to your Bugsnag dashboard when the app next launches. They will not be reported when the debugger is attached.

If you would like to send non-fatal or handled exceptions to Bugsnag, you can pass any Exception object to Bugsnag’s Notify method in your Unity scripts:

Bugsnag subscribes to the Unity logging framework messages. By default Unity log messages of type Exception will be sent as Bugsnag errors.

To configure which log levels will be reported as errors, see the Notify Log Level configuration option.

It can often be helpful to adjust the severity or attach custom diagnostics to handled exceptions. For more information, see Reporting handled errors.

Bugsnag will automatically capture and attach the following diagnostic data to every exception report:

It can often be helpful to attach application-specific diagnostic data to error reports. This can be accomplished by setting a callback which will be invoked before any reports are sent to Bugsnag:

In order to correlate errors with customer reports, or to see a list of users who experienced each error, it is helpful to capture and display user information. Bugsnag includes helpers for attaching an identifier, email address and name to reports that will be searchable in the dashboard.

By default we will generate a unique ID and send this ID along with every error report from an individual device. If you would like to override this identifier you can set the user ID property.

In order to understand what happened in your application before each error, it can be helpful to leave short log statements that we call breadcrumbs. A configurable number of breadcrumbs are attached to each error report to help diagnose what events led to the error.

Leaving breadcrumbs with a short message can be accomplished as follows:

When logging breadcrumbs, we’ll keep track of the timestamp, and show both the message and timestamp on your dashboard.

Bugsnag will keep track of the time and order of the breadcrumbs and show them on your dashboard.

Additional data can also be attached to breadcrumbs by providing the optional type and metadata parameters. For more information and examples for how custom breadcrumbs can be integrated, see Customizing breadcrumbs.

Bugsnag tracks the number of “sessions” that happen within your application. This allows you to compare stability scores between releases and helps you to understand the quality of your releases.

Sessions are captured and reported by default. This behavior can be disabled using the AutoTrackSessions configuration option.

Bugsnag will automatically report a session each time the app is launched or enters the foreground after being in the background for at least 30 seconds.

Monitor errors as you roll out features or run experiments and A/B tests by declaring your feature flag and experiment usage in the Bugsnag client. You can use the Features dashboard to identify whether these features have introduced errors into your app.

By default Bugsnag will identify crashes that occur whilst your app is launching, allowing you to prioritize fixing high-impact launch crashes.

Additionally you can use Bugsnag to detect recurrent launch crashes: allowing you to take evasive action in your app, such as resetting data or turning off application features.

Follow the Identifying crashes at launch guide to configure this functionality.